New study reveals that Mario Kart is the most stressful game based on heart rate increase experienced during a 30-minute gaming session.

The research put experienced gamers to the test to uncover the most demanding video games on the market, with results showing that Mario Kart produces a 32.81 per cent increase in heart rate.

Using heart rate monitors to test their reactions, the research conducted by BonusFinder, found that playing the legendary racing game elevated their pulse by an average of 21 beats per minute, raising the average resting heart rate from 64 BPM to 85 BPM.

The research was undertaken with 14 participants playing 16 of the most popular and challenging console, PC, and mobile games presently available. The participants, who were selected, were used to playing a minimum of 15 hours a week and were familiar with the video games that were used as a part of the study. 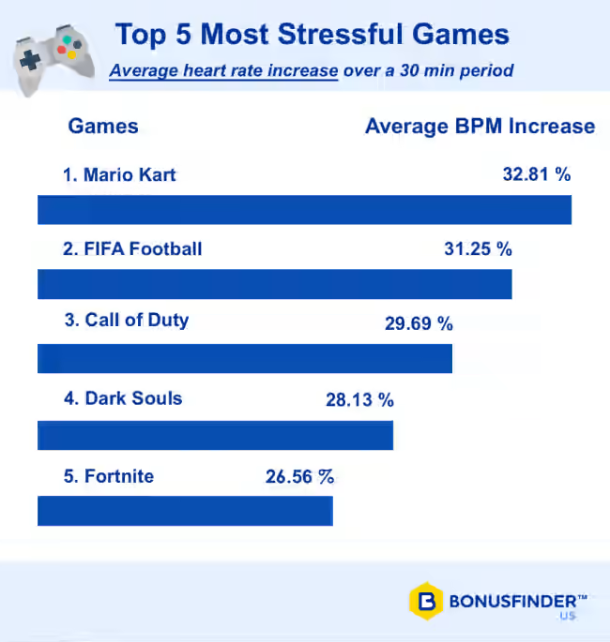 Animal Crossing, The Sims and Skyrim were all found to lower participant average heart rates throughout the course of a 30-minute session, by as much as 5 per cent. This would explain their popularity, as while competing to win games can be very fun and rewarding, sometimes all we want to do after a hard day’s work is unwind, explore and de-stress.

Fintan Costello, Managing Director at BonusFinder, said: “If you are looking for a timeless classic, Mario Kart remains a fan favourite even after three decades.

“What the study highlights is quite remarkable, despite all the newcomers with improved graphics and increased spending, the old Nintendo formula is still irresistible to gamers and nothing can replace the jeopardy of a red shell on the last lap of a race.

“It’s interesting to see in so many of these games, the increase in heart rate is equivalent to doing light exercise, which might explain why it feels like it takes plenty of energy out of those playing them.”

You can find the full study here.

The Four Top Bracelets for Him

Mike Collins Mortgage Advice – How a bridging Loan can help...

A group of protestors have invaded the Red Bull global headquarters...

Want to write for us?

Find Out How
Newsmag is your news, entertainment, music and fashion website. We provide you with the latest breaking news and videos straight from the entertainment industry. Stay close to see what's new and get ready to be amazed by the best quality information available.
Contact us: editor@universenewsnetwork.com
© UniverseNewsNetwork | 2021